A selection of songs …

All Coming Back, Because You Loved Me, Falling Into You, Make You Happy, Seduces Me, All By Myself, Declaration Of Love, Natural Woman, I Love You, If That’s What It Takes, River Deep, Call The Man, Nature Boy, I’m Alive, If I Could, At Last, I Drove All Night, My Heart Will Go On, What A Wonderful World, The Reason, Immortality, Treat Her Like A Lady, Love Is On The Way, When I Need You, Just A Little Bit Of Love, Misled, Think Twice, The Colour Of My Love, Let’s Talk About Love, The Power Of Love, Taking Chances, Have You Ever Been In Love, A New Day, Right In Front Of You, Ten Days, Rain Tax, Prayer, Pour Que Tu M’aimes Encore

THE VEGAS YEARS – ABOUT THE SHOW

Julia Martin is one of the most versatile and sought after Celine Dion tribute artistes in the world, and this sensational tribute show has taken Julia around the globe, entertaining audiences in the most prestigious of venues. The Entertainment Agents Association, have also recently voted Miss Julia Martin, the UK’s No1. Celine Dion tribute, in a glittering awards ceremony at the Athena in Leicester. An accolade that has been mirrored by both the BBC and Sky Television.

The Vegas Years – features the incredible talents of the fabulous Miss Julia Martin paying tribute to the biggest selling female artist of all time CELINE DION. This show will captivate and enthral the audience from start to finish, and is one of the hit tribute shows of the year, recreating songs from Celine’s time in Las Vegas. Sit back, shut your eyes and listen to all of Celine’s greatest hits, from her first USA number one ‘The Power of Love’ in 1994 to her latest album releases.

Celine is known for a clear mezzo-soprano voice and her five-octave range that can sing great ballads. Julia Martin matches this skill, with an amazing ability to re-produce Celine’s incredible vocal range, a feat that very few other Celine tribute artists can match. This means that Julia is able to perform each and every one of Celine’s songs in the original key, thus ensuring a vocal performance that is so true to the original that people in the audience could almost think that Julia was miming to the original song.

Celine is all about vocals and movements and Julia delivers on both counts in a performance that is simply OUTSTANDING. Julia has the ability to include the audience within the performance so that every person in the room feels special and all of her outfits are authentically copied from the originals. Lightning fast costume changes complete the illusion.

Julia is one of a select few Celine Dion tribute artiste that can perform a selection of songs in Celine’s native French language, and what better choice than Celine’s biggest selling French song to date, ‘Pour que tu m’aimes encore’, truly beautiful to listen to, even if you do not understand French. Julia can perform this song fully in French or half French / half English.

Julia whilst recently performing her Celine Dion tribute show in Dubai was also invited to meet up with Celine in person. The two of them spent time chatting backstage, just prior to Celine going out onto stage to perform her ‘Taking Chances’ world tour. Celine’s sister even took the time out of her busy schedule to come and watch Julia perform, commenting to Julia at the end of her performance that…

‘This was the best Celine tribute she had ever seen’ and that the looks, movements, mannerisms and most importantly the voice were absolutely spot on. She went on to say that it was just like watching her sister on stage’.

Julia’s dedication and attention to detail is what makes her shows so special and her amazing ability to mimic both the voice and movements would leave you thinking that you had seen the original artiste. Julia’s shows have been running to great acclaim for over 20 years and can be booked to provide entertainment from a 20-30 minute spot to a full 90-minute show. Performance timings are flexible to suit the client’s requirements and you will be guaranteed a great show delivered to perfection. All shows are provided with full PA, lights and a dedicated sound engineer.

CHECK OUT THE AUDIO CLIPS

A MESSAGE FROM CELINE DION …

“My sister and her friends throughly enjoyed your show last night, I was given some great reviews this morning. I’m sorry I missed it, unfortunately prior press engagements stopped me coming along. Good luck with your future shows.”

Celine & Julia chatting privately in Dubai, at the Four Seasons Golf Club, prior to Celine performing her ‘Taking Chances’ concert. 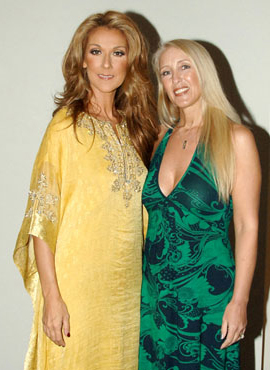 A number of unique trademark features within this show are what elevates this show to a ‘World-Class Production’, placing it firmly above any other Celine Dion tribute show on the market today. Julia’s vocal range, movements and mannerisms are just ‘Pure Celine’ and when you add, lighting fast costume changes and Julia’s unique ability to communicate, interact and entertain her audience, you can understand why clients all over the world want to book Julia to perform. But please don’t just take our word for it, read what our clients and guests have to say.

“Hi Julia, Fantastic Celine show last night. You thoroughly deserved the standing ovation. Thank you also for taking the time to chat to the audience during the interval. For all of us it was a night to remember, particularly for those you invited on to the stage to dance. Best of luck with your career and we hope to see you again before too long”. Gordon Carr – Press Officer.

“WOW! what an evening’s entertainment; Julia’s performance was truly amazing, I didn’t need to close my eyes to believe Celine Dion was there and really thought we had someone from Quebec in front of us.. every detail from costume to mannerism’s.. but the voice… incredible.. sent shivers down my spine especialy during “Think Twice” a song that evokes such memories for me and the one I predicted from the first time I heard it, knew that it would be a #1 hit. Julia gives it her all, she delivers everything and more than you can imagine. Any wonder that Celine Dione’s Sister saw her after a show and asked if she would come and meet Celine herself, it must have been an amazing experience and one truly deserved. Would I book Julia again? without hesitation, as I know that each and every one of my guests would be mesmerized by her incredible performance. And don’t think for a minute that our Julia is some kind of Diva! as she was there after her performance (probably exhausted!) helping Mike her husband pack up the myriad of wires and kit ready to get back on the road again… Not just an incredible entertainer, but down to earth, caring and kind, thoughtful and special in so many ways. What more can I say… you truly are inspirational, and I can’t thank you enough for giving everyone at the event such a wonderful night to remember”. With love – Peter x

“Just back from our holidays in Cork, Ireland where we saw Julie performing her Celine show. What a fantastic experience! Not Just the singing… The whole show and audience interaction coupled with Julia’s fantastic voice & talent makes those (And Im sure her other tributes) shows not to be missed. Definitely something that I will remember for many years to come and if the opportunity arises we will all will be in the front row again….. Thanks Julia!” Jimmy, Edel, David, Tina, Dympna & Seanie.

“Hi Julia we saw you in London performing Celine Dion, and I couldn’t get over how authentic you are and you put on a wonderful show and the professionalism you have and the way you work / involve the audience is amazing plus you made our night as it was our engagement. Thanks for taking the time to come and chat to us after the show …. you are amazing”. Malc & Angie

Thank you for taking the time to visit my Celine Dion Tribute page, I hope you found it interesting. Please keep checking back from time to time and visit the ‘News’ link to be kept up-to-date on all my travels and adventures. I can accommodate all types of bookings, be it small or large events and I have performed to just 12 members of an overseas Royal Family in a private suite in the Dorchester Hotel, London, right up to an outdoor stadium of 20,000 people. Also please check out my Celine Dion theatre tour in aid of Autism Unseen, a two hour production that truly captures the presence of a live Celine performance.

I welcome all enquires both home and overseas, and when travelling abroad, be it anywhere in the world, I travel on my own to keep the clients costs down. Celine may travel with an extensive entourage, but I am very grounded in offering my clients exceptional value for money and I would not burden them with additional travel costs for extra people.

I would love to hear back from you, if you want to check prices or availability, or if you just want to have a chat about a particular style of show, then send me a message below. If you have seen me before and would like to leave a comment, send one back via the contact form and I will do my best to post it on my comments feature.