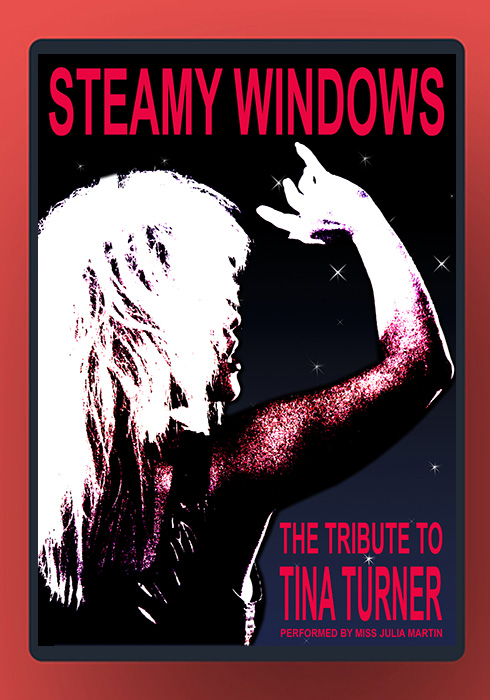 This high energy production is one of Julia’s longest running tribute shows, performed around the world, with standing ovations and repeat bookings on every occasion. From its conception 20 years ago, this incredibly authentic show captures the image, the stage presence, the legs and most importantly the voice of this great rock legend.

Julia in a recent interview commented… ‘I have always had a love for Rock Music and Tina has been one of my idols for over 20 years, she is one of the few tribute characters that I have yet to meet in person and I think Tina’s life story is simply inspiring. I have built my tribute show around Tina’s sensational live performances, with all my music being individually produced to capture the ‘energy and beat’ of a Live Tina concert. I have had so many people pass comment, not only about my vocal accuracy but also my backing tracks, it was an expensive project with over 30 songs commissioned, but incredibly worthwhile and it certainly adds an extra layer to my performance.

Attention to detail, careful research and a commitment to accurately portray Tina both vocally and visually is what makes ‘Steamy Windows’ special. Julia becomes Tina in every way, wig, make-up, replica costumes and of course the famous legs and movement. But  a tribute show is not simply about looking like someone, you have to become that person, you have to be able to step onto stage, capture the audience, and sell the illusion.

Julia, makes this show her own, catapulting it to the top of the Tina Turner tribute list. With vocals direct from Nutbush, Tennessee, mannerisms that are ‘Pure Tina’ and a stage presence that commands the room, Julia weaves her magic and delivers a show that when you shut your eyes; Tina Turner herself is in the room.

CHECK OUT THE VIDEOS

A number of unique trademark features within this show are what elevates this show to a ‘World-Class Production’, placing it firmly alongside the top Tina Turner tribute shows on the market today. Julia’s vocal range, movements and mannerisms are just ‘Pure Tina’ and when you add, lighting fast costume changes and Julia’s unique ability to communicate, interact and entertain her audience, you can understand why clients all over the world want to book Julia to perform. But please don’t just take our word for it, read what our clients and guests have to say.

“Hi Julia, Just wanted to say what a brilliant night we had, entertaining, fun and above all the vocals were spot on. My friends have also text us this morning to say thank you for a terrific evening, I’ve never seen my mate on stage doing his thrust thing to a Tina Turner song before and it had me in absolute hysterics! So glad I had a bad leg or it could have been me!! Top Woman Tribute act and hugely talented, Thank you” Graham Veryard

“Amazing, Never seen anything like it. Julia was so like Tina it is unreal. She has a really powerful voice and looked sang and spoke like her. Would watch her again and again. Such a lovely energetic person and puts everything in to performing . Thank you for such a great evening”.Peter, James, Eileen & Sophie. Hayling Island, Hampshire.

“Hi Guys, My husband and I are still talking about your Tina Turner show you are fantastic, we have seen you many times now doing all of your different shows and think that you are amazing. We still find your transformations incredible and the speed that you change still baffles us and for anyone who has not seen you they don’t know what they are missing. Once again thanks for a great night and we look forward to seeing you soon”.Best Wishes Sally and Peter (Southampton)

“What a show, I have seen many Tina shows over the years but you are without doubt the most incredible I have ever seen. Your transformations are enough to make me speechless, you are an amazing performer and entertainer, not just a singer and to top it off your voice is out of this world with a matching personality. Thank you so much and I am already excited about the next show in May”.  Eric. Hull Wyke Round Table

Thank you for taking the time to visit my Tina Turner Tribute page, I hope you found it interesting. Please keep checking back from time to time and visit the ‘Latest News’ link to be kept up-to-date on all my travels and adventures. I can accommodate all types of bookings, be it small or large events. I have performed to just 12 members of an overseas Royal Family in a private suite in the Dorchester Hotel, London, right up to an outdoor stadium of 20,000 people. Also please check out my Tina Turner theatre tour in aid of Autism Unseen, a two hour production that truly captures the presence of a live Tina performance.

I welcome all enquires both home and overseas, and when travelling abroad, be it anywhere in the world, I travel on my own to keep the clients costs down. Tina may travel with an extensive entourage, but I am very grounded in offering my clients exceptional value for money and I would not burden them with additional travel costs for extra people.

If you have seen me before and wish to leave a comment, or ask any questions with regard my Tina show, then send me a message via the contact form below.